Singapore is a destination brimming with stunning sights, fascinating activities, and a plethora of day excursions for the entire family. Almost everyone has seen an image of the city’s emblem, the Merlion. Along with the iconic emblem, the neighbouring Marina Bay Sands and Singapore Flyer, both of which provide spectacular views of the renowned Singapore cityscape.

Singapore, often known as the Lion City of Southeast Asia, is a must-see for all travellers, whether you’re looking for adventure, urban exploration, or are a proud foodie. Go island hopping to Pulau Ubin or Sentosa, or explore Changi Village’s street cuisine and Tiong Bahru’s paintings. This buzzing city has plenty of places to entertain you.

This little island state is also a place of opposites; Chinatown and Little India, both gourmet and shopping hotbeds highlight the country’s amazing ethnic variety. Experience an unbeatable nightlife experience with The Oakwood’s Kesa House Unlimited Collection Hotel, or visit The Wanderlust Hotel for some of the city’s most attractive dining and drinking establishments. Discover all of this and more in AP LBC’S list of the greatest things to do in Singapore.

1. Enjoy yourself in the Gardens by the Bay experience.

Gardens by the Bay, perhaps one of Singapore’s most recognisable sights, would seem quite at home on the set of an extraterrestrial home planet. The Supertree Grove, with 18 vertical gardens, the highest of which reaches over 20 storeys, is its most remarkable feature. The Supertrees are best visited at night. Gardens by the Bay is free to enter and open every day. 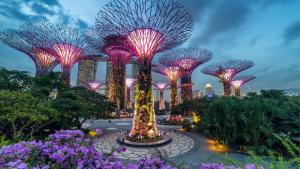 Gardens by the Bay’s position allows for a quick escape from Singapore’s bustle and skyscrapers. It provides a delightful environment to learn about horticulture from across the world. Better yet, the Supertrees, Cloud Forest, and Flower Dome bring plants to life in ways you’ve probably never seen before. Don’t miss out on the opportunity!

2. Hop into a ferry and enjoy the Island of Pulau Ubin! 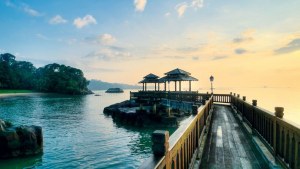 Pulau Ubin is a tiny island in Singapore’s northeast. This island, devoid of buildings and vehicles, serves as a reminder of what Singapore was like just a few years ago. It is host to one of Singapore’s remaining traditional villages, where the residents live a modest existence supported by fishing and agriculture. To get the most out of your vacation to Pulau Ubin, hire a bike and tour the island thoroughly, keeping an eye out for the German Girl Shrine and other Singaporean landmarks. To travel to Pulau Ubin, take a ferry from Changi Point’s port.

3. At the MacRitchie TreeTop Walk, experience the thrill of flying over the forest.

MacRitchie Treetop Walk is located near MacRitchie Reservoir, so get some water and go. The bridge has a span of 250m (820ft) and is 25m (82ft) above the ground. Wear comfortable shoes and bring lots of water as it is a long walk. See if you can find a large monkey family by strolling along the boardwalk around the reservoir.

In Tiong Bahru, if you look closely, you’ll uncover some hidden artistic gems. Yip Yew Chong, a local historical enthusiast who grew up in the area, has painted three murals that represent some of his experiences. Former animal photographer Ernest Goh used to have a series of chicken fish pasted on the walls of Tiong Bahru market, where you can also view a vivid peacock and its tail feather on the inner air well painted by Australian artist Makatron.

5. Have an exhilarating experience at Universal Studios 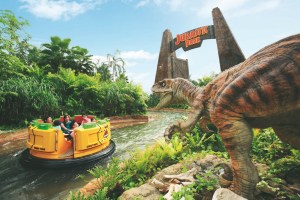 Singapore’s Universal Studios was Southeast Asia’s first theme park of its sort. A total of 20 attractions are spread among the park’s many themed zones, such as The Lost World and Ancient Egypt. Two of the rides are water-themed, while the other five are roller coasters that will leave you breathless. A merry-go-round and a children’s roller coaster are also available for families with little children. On Sentosa, Universal Studios is easily accessible via the MRT subway.

Some of Singapore’s most illustrious legacy may be found in its three cultural districts: Chinatown, Little India, and Arab Street. As goes the saying, your trip to Singapore isn’t complete without visiting these three diverse hotbeds of cultures. With Oakwood’s Unlimited Collection in our armoury, your quest is over for a staycation and experience your locality fabulously. 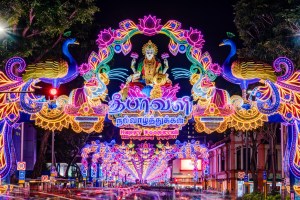 Line up for a dish of Michelin-starred chicken rice, then go over to Arab Street for your fill of Mediterranean cuisine, followed by an evening of shisha and continue to observe the folks around you. Join one of the National Heritage Board’s self-guided excursions around Little India – or arrange a walking tour – and take in the religious variety and brilliant contrasting colours of your surroundings.

7. Munch in at hawker centre! 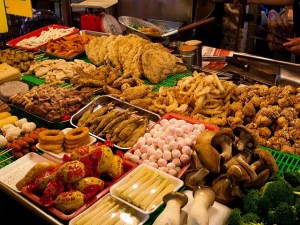 When it comes to food, eating the local cuisine is the greatest way to fully understand a country’s culture. There is no dearth of local food with culinary influences from all around the region. Tuck into some local favourites like chilli crab, laksa, and chicken rice, or taste the Malay, Tamil, and Chinese food that is popular across the city. Go where the locals go for the finest locations to eat local food and get a cheap dinner at a hawker centre. Changi Village Hawker Centre is one of the most popular, with some of the greatest must-visit and try shops like International Nasi Lemak, Ho Guan Satay Bee Hoon, and Weng Kee Ipoh Hor Fun.

8. Singapore Zoo is a great place to get wild. 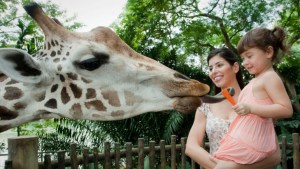 Over 300 kinds of animals live at the Singapore Zoo, which was established in 1973 and spans roughly 70 acres (28ha). As an “open” confinement concept, it’s generally commended for its design, which makes it easier for animals to feel at ease in their surroundings. The zoo provides a range of transportation options for visitors, including trams and boats. The night safari at the zoo is a unique opportunity to see how many animals act at night, and it’s only available after dark.

9. Explore the city’s museums to expand your knowledge.

At first look, the ArtScience museum impresses with architecture as distinctive as its globally recognised exhibits. The museum, which was designed by famous architect Moshe Safdie and is fashioned like a half-unfurled lotus flower, overlooks Marina Bay and entices inquiring minds with its innovative exhibit-filled rooms. The ArtScience Museum, which has a popular permanent exhibit named Future World: the Convergence of Art and Science as well as numerous visiting exhibitions exploring the intersection of science, technology, culture, and art, should be at the top of your Sin+gapore agenda.

10. At the Mint Museum of Toys rediscover your inner child.

This museum is an enthralling, and occasionally nostalgic, pastime for people of all ages, whether you are young, young at heart, or youthful in spirit. With a private collection of over 3,000 toys from all over the world on exhibition, you’re bound to find your favourite childhood companion in the Mint Museum of Toys, no matter where you’re from. Enjoy the blurry-edged, dust-splattered recollections of your youth as you explore the collection on your own or with your children – but we can’t promise they’ll be able to match your enthusiasm for your favourite limited edition action figure.

11. Get stupefied by the exuberance of the National Museum of Singapore! 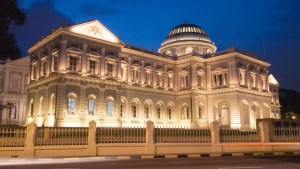 The National Museum of Singapore is the city’s oldest museum, but don’t anticipate mouldy, neglected ancient rooms despite its 1887 inauguration. The building’s neo-Palladian design from the nineteenth century is vividly complemented by modern interiors. Are you impressed, but still think a room full of artefacts isn’t for you? In keeping with its dedication to innovation, the museum also includes immersive displays that are ideal for immersing yourself in Singapore’s early history in an interactive, 21st-century setting.

Singapore comes alive at night, with light shows enthralling audiences across the city. While there are frequent, spectacular performances at Marina Bay Sands, seasonal light shows on Sentosa Island are also popular. There’s a free light display, appropriately titled Island Lights, showcases your favourite Sanrio characters – Hello Kitty, My Melody, and Small Twin Stars – and will dazzle you and your little ones with seven larger-than-life light displays. 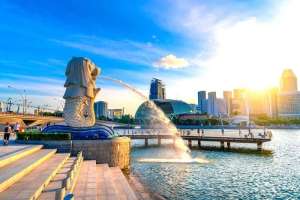 The renowned 28-foot Merlion monument, a half-fish, half-lion stone carving that sprays water into Marina Bay. The fish represents Singapore’s origins as a fishing hamlet, while the lion head refers to Singapura, which translates to “Lion City” in Malay. It was built in 1972 and is now one of the most popular tourist attractions in the country. Don’t miss the Merlion Cub, a 6.5-foot-tall statue that rests behind the big man in a fountain.

Singapore is a destination of dreams and wonders, which has something for everyone. Relatively a small island and a former fishing hamlet, the modern city of Singapore has a lot to offer! With the unveiling of Oakwood’s premiere brand of Unlimited Collection, which our team at AP LBC is proud to represent, you are always near things that will always fascinate you.

Have a sublime experience of destination Singapore! Bon Voyage! 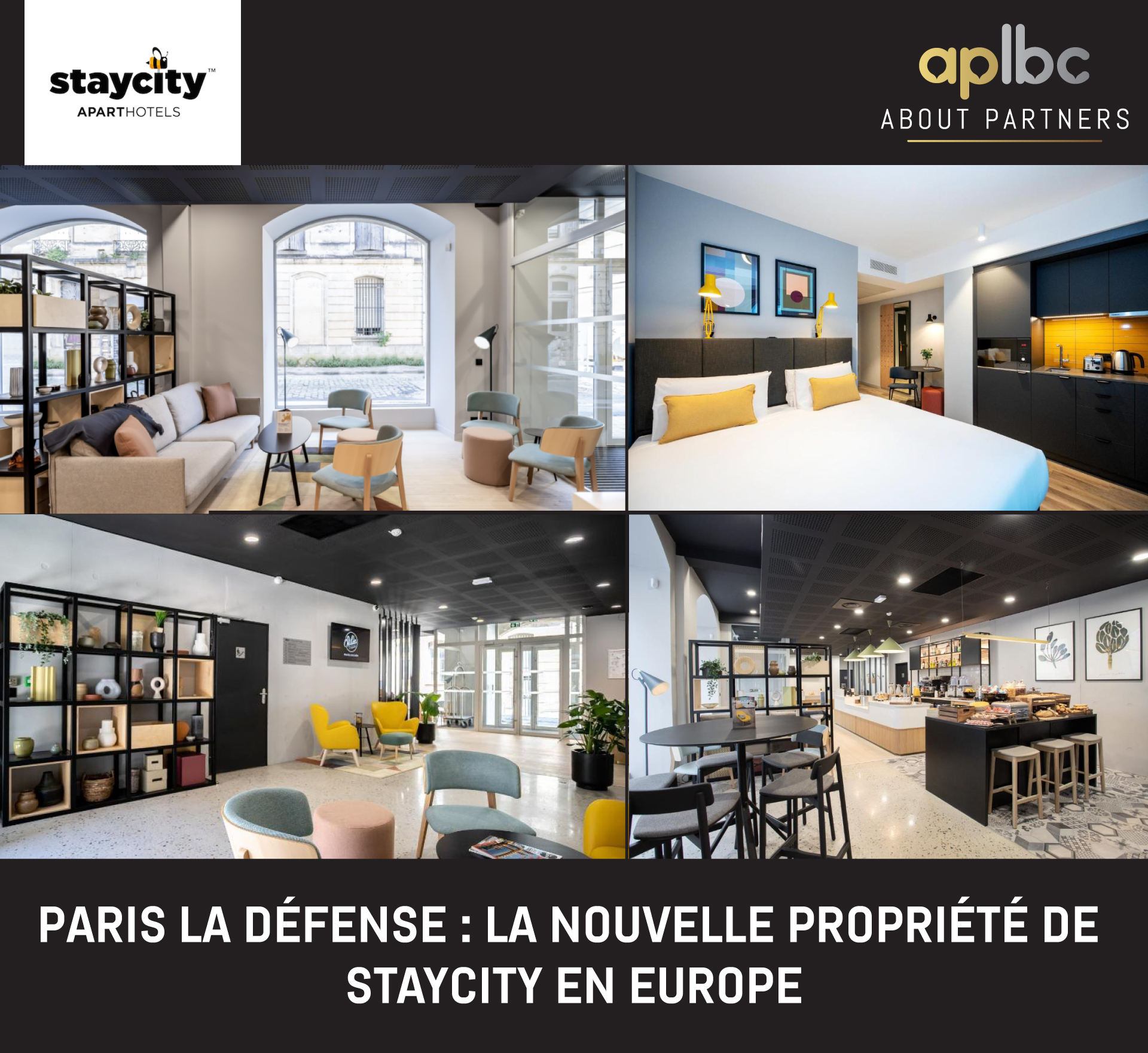 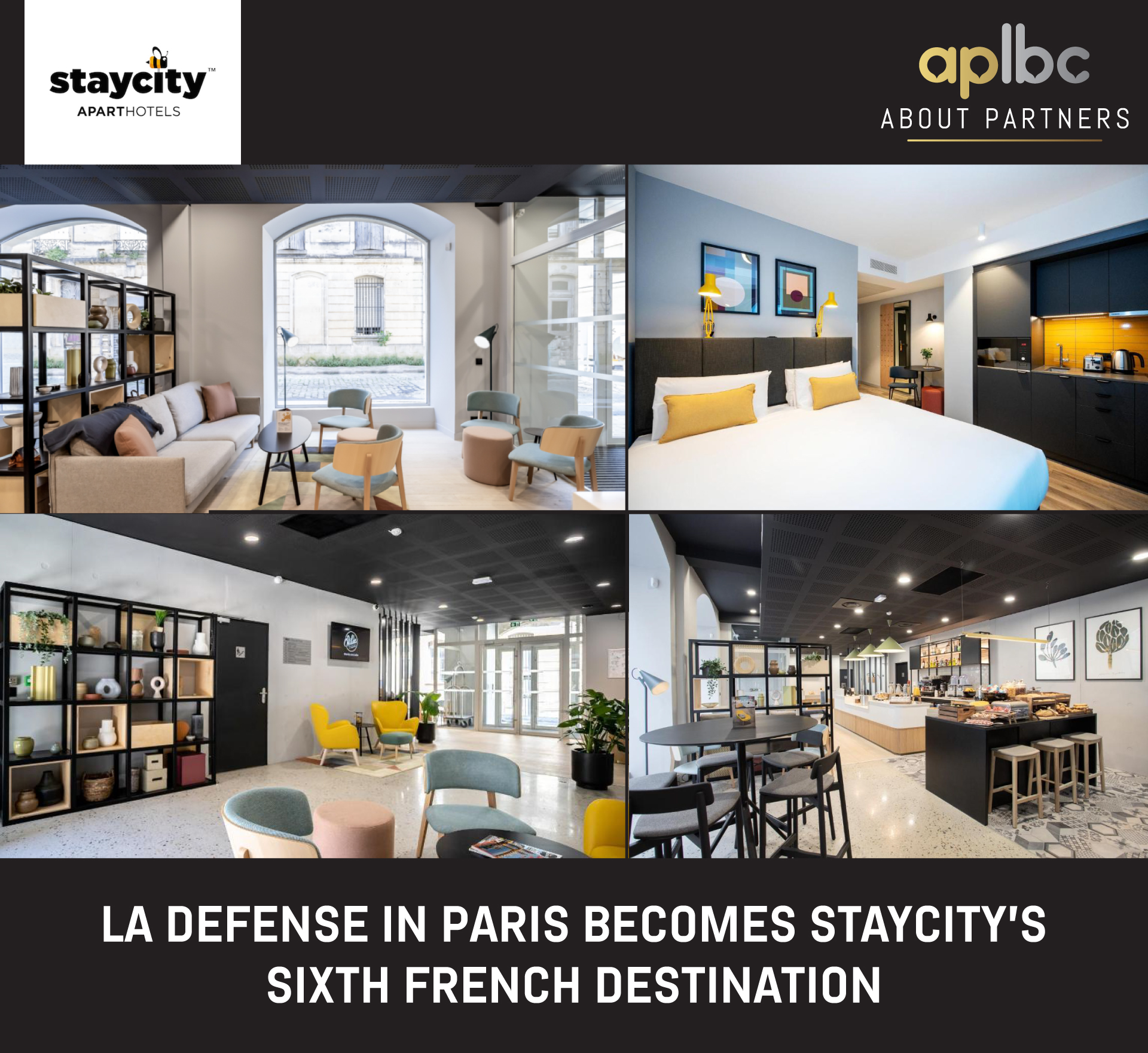 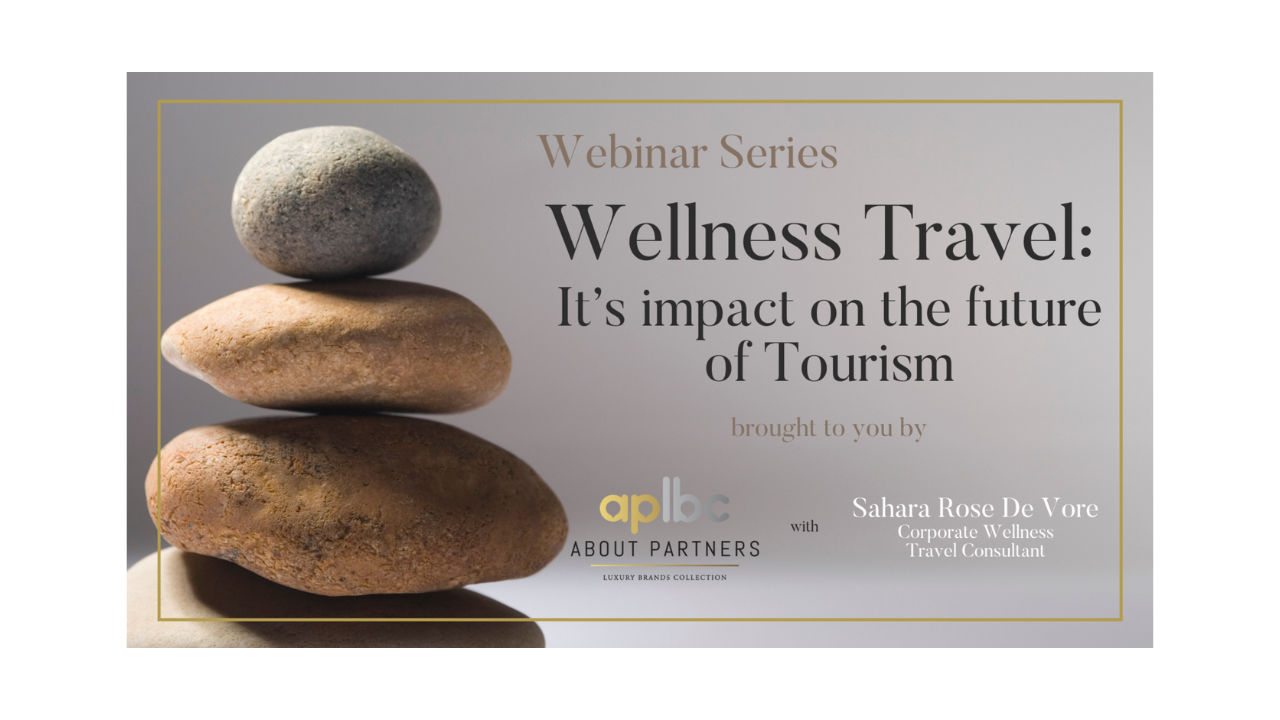